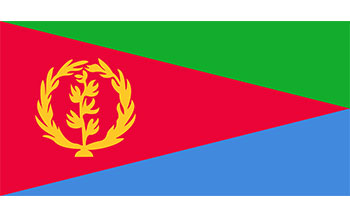 Eritrea is a country in the Horn of Africa. With its capital at Asmara, it is bordered by Sudan in the west, Ethiopia in the south, and Djibouti in the southeast. The northeastern and eastern parts of Eritrea have an extensive coastline along the Red Sea, across from Saudi Arabia and Yemen. The nation has a total area of approximately 117,600 km2 (45,406 sq mi), and includes the Dahlak Archipelago and several of the Hanish Islands; and has an estimated population of approximately 6.5 million.

Eritrea is a member of the COMESA (Common Market for Eastern and Southern Africa) and Intergovernmental Authority on Development (IGAD). Its economic profile is summarized below: Eritrea has a very large subsistence agriculture sector, though agriculture contributes to about 17% GDP. The country has considerable mineral wealth but faces various economic challenges. The manufacturing sector is relatively small contributing to about 6% GDP, and services sector close to 60% GDP. Global remittances are important source of to the economy.

UNCTAD’s 2014 Report indicates that in 2012-2013 Eritrea’s merchandise exports were mainly primary products (e.g. food and agriculture; minerals, metals and ore) , accounting for about 86.9% of the total, while manufactured goods represented only 9.7%. Trade with other developing countries represents only 11% of the total, compared to about 87% with the United States and Canada. Imports are mainly manufactured goods, accounting for 60.8% of the total, compared to 38.5% for primary goods.